Live streaming a concert brings a worldwide audience to your stage, turning your small venue into a global event! Artists, agencies, venues and festivals are livestreaming events to reach bigger audiences than ever before.

Hildreth Media Group specializes in connecting artist to their fans. We stream in 1080 HD, 3840×2160 UHD, and/or 4096×2160 4K formats over social, public and/or private networks. We are the artists megaphone!

Celine Dion – Courage Tour Announcement. Celine Dion is regarded as one of pop music’s most influential voices. Her music and vocal style, have been said to shape how the bulk of modern female pop vocalists sing. Celine has played a role in reshaping the adult contemporary radio format, making it one of the most popular formats of the 1990s and early 2000s.

In Jan. 2018 AEG Events reached out to Point Media and Hildreth Media Group for assistance in broadcasting Celine Dion’s upcoming tour announcement on Facebook Live. The event was scheduled for April 3rd at the historic Ace Theater in downtown Los Angeles. Celine was to sing 3 songs then make the announcement of her upcoming Courage tour. She would then sing another 2 songs and conclude with a short interactive Q&A on Facebook.

Behind the scenes of Celine Dion Facebook Live event = https://youtu.be/ZkC3SOUxzAo

Together with AEG, Point Media and Hildreth Media Group began working with Facebook to make sure the event was well promoted and capitalized on Facebook’s busiest time for our targeted demographic. We worked closely with Ace theater for camera positions, jib placement, video village and encoding needs. We did a thorough stress test of Ace’s internet service provider for both primary and backup streaming systems.

Call time was 11am on April 2nd. We loaded in and began setting up cameras, jib, master control, encoding, etc. By 4pm we had video and audio signals from all cameras, playback and from Celine’s audio team. April 3rd we continued to fine tune and at 11am Celine arrived. After a meet-and-greet with crew, Celine took the stage for her sound check. Lighting was finalized, we calibrated/matched all cameras and tested/monitored steams through a private Facebook Live page.

“Pro. Period. That’s the short of it. Royce is well-spoken, but of few words. He’s happiest behind a camera lens or directing and calling a live event. As colleagues in the industry, we turn to Hildreth Media Group as our streaming authority of Live Events, whether here in the US or as far flung as Rwanda. Royce’s proprietary equipment allows us to stream live events cost efficiently, without a middleman. Recently, we worked together on events for Brigham & Women’s Hospital and our production of a live-streamed concert with Celine Dion.”

The event and live stream were perfect. Celine Dion’s singing and performance was well received by the house and online audiences. The crowd erupted as she revealed her tour dates and everyone loved the interaction with all the questions that came in through Facebook live.

Hildreth Media Group is San Diego and Southern California’s number one streaming provider. Our live streaming and production services help you connect and communicate with your fans, influencers, and strategic partners around the globe. 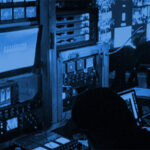 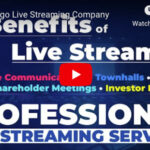 Three major benefits of live streaming for your corporation